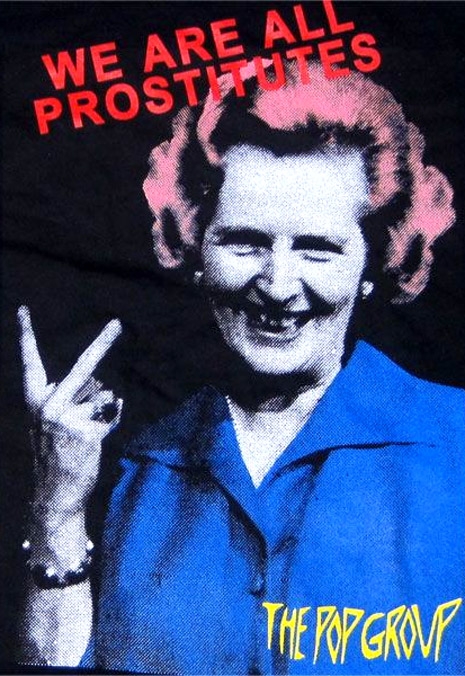 The shrieking, disjointed funk of the Pop Group is something I distinctly remember discovering via a Nick Cave interview at some stage, during a long trawl through the archives of youtube in which I spent a great deal of my time. Indeed a similar quality immediately excited me in the Pop Group to much of the earlier Bad Seeds output, and it comes back to this sense that it was all on the verge of falling apart. Cave is at his best when the music and his singing exhibit an almost unbearable tension between fantasy and contact with reality [I am reminded when I was playing Tender Prey once and a friend remarked that it sounded like “bad karaoke”, YES, exactly]. The tight rhythmic stabbing and falling-apart dub-noise crescendos of the Pop Group existed on a level of tension which was far more formal than character driven, driven by a kind of abandon which you can only imagine some kind of stuffy muso calling “sloppy”, you get the constant sense that the sound hangs together on a thread. You can FEEL the tears and cracks in the recording, through which bleed the paranoiac screams of a political present.

A political present not of now, but of the 80s. When Cave called it “violent, paranoid music for a violent, paranoid time” could he have been referring to any other moment? Indeed, its interesting to note that for many the 80s, and in fact the 80s of our ballroom-decadence-consumer-wonderland fantasies, the entire simulacrum of neon, shoulder pads and analogue synthesizers, it is anything but violent and paranoid. The 80s which we now experience, lifted from its moorings and floated somewhere out into the ocean of time-locked pathologies, is one drained of this paranoia, a grainy VHS filter on a time of excess where the political and social horrors of Thatcher and Reagan become at best historical markers, at worst just a kind of background fuzz to the never ending carnival of glitzy fitness regimes and faded primary colours. The Pop Group seem then to speak more to a subterranean unrest, and indeed existed as a vestige of anger and refusal of this sickly-sweet vision that we can now recognise as the dreamscape of the new capitalism, the promise of a future of endless neon, shoulder pads and synthesizers becomes the vanguard of a stifling regime of individual competition.

Mark Fisher pointed to the Pop Group as holding on to art as Marcuse’s “Great Refusal” of the status quo, as something that still contained something of that negative power against the increasing realist dogma of acquiescence. When I found them in the sprawling bootlegs and leftovers of the internet it was, like so much I found there, like a kind of radio transmission from a subterranean, buried history. The jagged, screeching lines of the dub-cracked, distorted guitar tones, the voice like some kind of detournement of not only political but ontological proportions, burst through the earth. A sense of urgency that still resonated in that expansive chamber that couldn’t be entirely extinguished, a thread of an impulse could be drawn out of the well and couldn’t simply be hung on the wall as a museum piece without reducing it to an empty simulation, a diorama in a glass case.

Part of this is the simultaneously open-ended yet sharp and contained nature of this sound, the apparent contradiction that keeps it in motion, that tension.. Its something that few groups now allow themselves, that level of disjunction, perhaps even inventiveness, where each musician comes from a different corner and what seems like it shouldn’t work combines into a tight yet cacophonous textural schizophrenia [a similar loose-discipline can be found in the Fall’s best material]. The best thing about the Pop Group, and what really got me about them back then, was that element of refusal, the refusal to recycle or replicate, the refusal to allow a kind of simple reconciliation with the pop mainstream and commitment to marginal pop appeal, a refusal to iron out tension and hence to dull an edge which is so needed to slice through the thick, muggy atmosphere of the present. Their “violent, paranoid music ” is something that seems to act like a kind of spatio-temporal disuption of sorts, its yelped proclamations and warnings, fractured dub funk and driving confrontation seeming more, not less immediate, as if these transmissions from a lost underground have appeared through the radio static, directly beamed from some remote outpost on another planet into the violent, paranoid present.. they become part of a barely-perceived scattered world that lies concurrently to this one, where subversion was still something that could convince.

Isn’t the problem today that subversion has become something of a hobby, like satire? We have a free reign to subvert, as long as we don’t get anyone into trouble, as long as we do fall within the lines enough to dissolve any actual confrontation into a meaningless bonhomie and stultified politeness; it’s ok to throw things about a bit on Jools Holland as long as you don’t go too far and undermine the structure of the show, the idea of punk transgression, at some point still believably a powerful spectacle of detournement, fully assimilated and thrown back up as another riff, another tic, another form we can endlessly throw up onto an audience. It is demanded that we become caricatures, that we play towards the so-called authenticity behind the mask, the iconoclasm we are supposed to have believed in wafting and mingling with the clouds of stupefaction and similitude. Even Punk has to grow up, right?

The distinction here is what is implied by “grow up”. It isn’t that there is no value in a kind of slowness and reflection that comes with.. well, living, but that this is expected to arrive with a kind of ubiquitous cynicism, the implication that we used to be idealists but then found out about the reality of the world. This is why in putting our ears to the rock and hearing these buried transmissions, in perceiving the vibrations of something that now seems impossible or hopeless, an important metamorphosis can be attempted. The paradoxical intersection of time, space, of entire worlds, begins to weave a tapestry of galvanized potential. It is indeed in rejecting this association of age, or life with disenchantment, from rejecting the incompatibility of a youthful rebellion and an aged reflection, that we can begin to piece together these fragmented broadcasts, and re-orient ourselves not only culturally but in time and space itself.