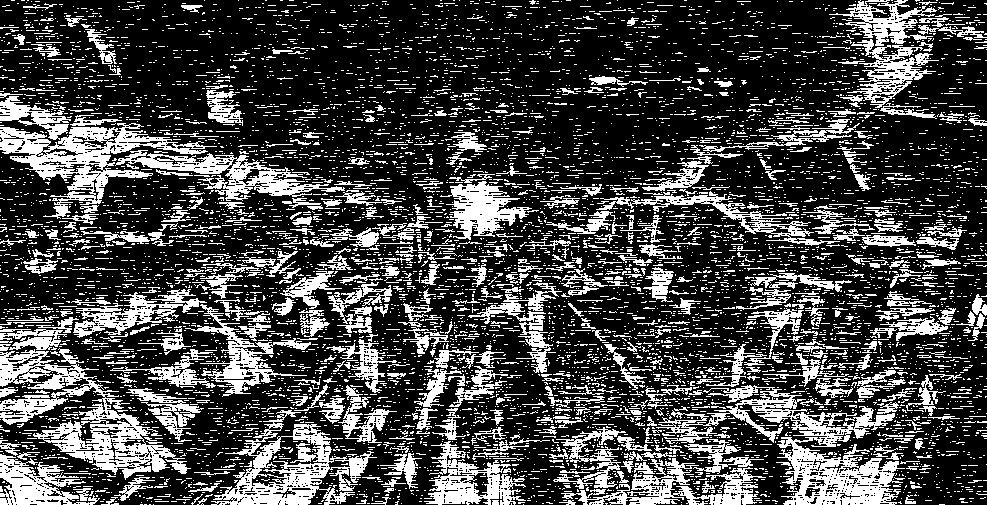 It is a centre, but not the centre, a heart, but not the heart.We find it as a pulsating spike of intensity in the interlocking diagrammatical mesh of organisms, a glistening mass of tentacular flows, a nervous system spliced into the white hot rock of matter. The city is the hyperspace where we most easily tune into the Deleuzo-Guattarian schizoid imaginings of information driven capitalism, where we find the oscillating gradients and intensification of current through the veins of organic machinations. London is a bubble, but it is not suspended in a membraneous isolation from neighbouring assemblages and affects, but part of a gigantic metastatizing organism of fleshy tendrils stretching across and into fibrous surfaces.

The city never really ends… it is an intensification, a nerve cluster, one that simultaneously attracts and repels its surroundings, keeping them attached to its surface membrane enough to subsume its outside gradually, expand until expansion reaches its inevitable limit. It may be that, as Fisher illustrated in Capitalist Realism the kafkaesque bureaucratic structures of the call centre are the closest we come to accessing capital-in-itself, but the city-at-large is the point where one can most immediately experience its flux, its libidinal excess and screaming contradictions. It is on Oxford street, in the throng of consumers, that one can see in a true sense what one elsewhere experiences as a poetic description, a fiction materialised. Thousands of organisms coexist yet blur into a current, producing endlessly shifting patterns corralled and machinised through the canals and wires transporting current through the cerebral interface.

In many ways, walking through this milieu, the copy of anti-oedipus sitting at the bottom of my bag seems to elucidate itself, make itself clearer, manifesting itself in my surroundings, an encounter with theory more beautiful than anything one might accomplish in the academy, simply going through pages, references, dusty old interpretations. It is here in the outside world that the implications of theory lie, in much the same way as Deleuze and Guattari evoke the “schizophrenic out for a walk” over the “neurotic lying on the analysts couch”. Here, wandering the streets of this organ of intensities, the dusty old corridors of academia break and give way to the active swirling melange of discourse, of nomadic enquiry.

It strikes me that the brute fact of the matter is that I’m reading, and more to the point getting value from more theory now than I ever did when I was a student. Part of this is indeed my own personal shift out of the inky blackness of resignation and cynical capitulation, but on another level it is simply freeing to study outside the reigns of academic writing. It might sound somewhat contradictory, but this unshackled hunger that has emerged from the rigid formulae of the academy is leading me to finally consolidate my desire to move on with academia and to engage with it again on my own terms in the future. This time I would not enter those halls simply because I feel like I have to, or because I have nothing else to do, but out of a genuine wish to grasp the subject matter and pull something out of its chest, a beating heart of something as yet undefined and unformed.

[AGENTS OF THE BLACK HOLE]

Flee from all those rigid monomaniacal tyrannies who would trap you in the fluffy and worthless safety of ignorance, those who wish to prove themselves, the charlatans of nihilist hedonia pushing you to an early grave, playing to your anxious desires. These are the agents of virulent malaise with nothing to give, intent on ruining all about them, latching to the underside of power and riding the wave, those who to spite themselves spite you. There is more outside than the protestations of these insular power-hungry parasites would ever admit, tangled as they are with the monstrous hatred of their own being, the existential terror they face upon the realisation that they may not be the copernican axis of cosmic power.

This is something that might not be self evident about the seemingly sudden wave of angry reactionary sentiment in recent years, and the mindset of those who lie caught in its web, the deep void that lies somewhere behind their veil of belief, the sheer terror that underpins the clusters of grotesquely regressive online communities of ex-new-atheists tooting incessantly on the rusty horn of pop-rationality, a shrill and annoying sound that barely makes it out of the pits they’ve dug for themselves, but occasionally can be heard, an echo of panic in its dissonant tone.

The existential black hole lying somewhere beneath the far right isn’t something that has been addressed nearly enough in discussions around its nature, as its something I feel strikes at its weak spot, the philosophical emptiness of pure negation and the complete shallowness of everything they stand for; not for nothing do many online communities IDing as anti-progressive, anti-feminist, conservative, any number of right wing reactionary positions, couch almost everything they do in an imperceptible construction of irony, the irony of fools that belies the real implications of the ironic action, the lack of conviction in the validity of ones own position, so much that one tries to negate it by reducing it to a “joke”. The reason becomes evident as to why this is no laughing matter however when one realises that ironic action spreads itself entirely unironically, the effect belies the intention even if, and here I’m being very generous, the intention was ironic, not some kind of misguided flailing at the wind, an attempt to mask their own insecurities through a pretence of privileged knowledge.

The appearance of these huddled groups of rage-driven misanthropes is in many ways driven by the same vapid emptiness underpinning the neoliberal enterprise. The conjuring of problems for them presents itself as a scapegoat yes, but for what? Many who tackle this subject fall back on their libidinal capitalist tendencies and stop short of pointing at the entire rotten corpse before them, but in this regard they too wilfully disregard the fetid stench and grotesque appearance of the issue and simply repeat the same tired dogma of reform, a little bit here and there and this will all be better, there’s no need for anything drastic folks, just tweak the settings and your experience will be back to normal.

From the same existential nullity come two different forms of blindness. That of the ego-driven pseudo-rationalist and those of the comfortable centre-liberal inculcated into the libidinal infrastructure. Both do their utmost to ignore the stench of death in the air but both are its very symptom, attempting to ignore for as long as they can this distant memory of anything outside this cosmic PR campaign.

[THE HEART IS EMPTY]